You are here: Home / О проекте / About Program & Projects

The Program and its projects are unique within their sphere since no similar programs have ever been conducted by the Russian Federation outside its territory. The Program is of high significance for regional and global safety for it helps to establish efficient controls over the epidemiological situation and take timely prophylactic measures as well as provide timely medical aid to the population, especially various risk groups like emigrants, members of their families, injection drug users and others. It is one of the tools used to fight global threats like drug addiction, drug trafficking and illegal migration.

Providing aid to developing countries in their fight against HIV/AIDS and other inflectional diseases, including strengthening of their talent pool and infrastructure for the national sanitary-and-epidemiologic welfare systems, has been a top priority for G8 since 2006 G8 Summit in St Petersburg. Under its Presidency in in 2008-2009 Russia announced its intent “to give rise to cooperation in healthcare industry and, in particular, in the fight against inflectional diseases” and “to assist partner countries in all matters related thereto”.

To achieve these aims and objectives the Concept of the RF participation in International Development Assistance approved by the President of the Russian Federation on June 14, 2007 along with the Decree by the President of the Russian Federation dated May 7, 2012 «On the actions to implement foreign policies of the Russian Federation», were adopted, which established a framework and methods to achieve the objectives. These activities resulted in a Regional Program for providing technical aid to the countries of Eastern Europe and Central Asia on prophylaxis, control and management of AIDS / HIV and other infectious diseases (2013-2015), according to which Russia is currently aiding the member countries, such as – Armenia, Kyrgyzstan and Tajikistan in strengthening their potential to establishing efficient controls to reveal, treat and prevent AIDS /HIV, sexually-transmitted infections (STIs), viral hepatitis and other parenteral diseases. Alongside with this, the Program is the only source of technical aid aiming to cope with HIV/AIDS epidemics supported by the Government of the Russian Federation as a donor in the countries of Eastern Europe and Central Asia/CIS.

В Under this Program, the Russian Federation allots funds to UNAIDS. Its partner on the Russian side has become a regional non-governmental organization AIDS infoshare. The NGO has been delivering excellent performance for over 20 years, including across the countries stated above amongst other regions, and has got extensive experience in participating in and organizing various international and Russian programs aimed to prevent and manage AIDS / HIV being both funds operator and direct executor.

UNAIDS and its partner the Russian NGO AIDS Infoshare took onto themselves the responsibility to execute the Program in accordance with the Memorandum of Understanding between the RF Government / Ministry of Finances and UNAIDS. Participation of an NGO in the Program boosts its potential and presents a new mechanism for cooperation aimed to implement priority tasks of the Russian Government in this region.

To bring the objectives to life, the Russian NGO AIDS infoshare has launched a project to aid the countries of Eastern Europe and Central Asia in developing their national programs to fight AIDS/HIV, STIs and viral hepatitis. The project was named RUSAID. Its main purpose was to increase the potential and possibilities of the member countries to run a wide variety of programs to prevent and manage HIV/AIDS, STIs and viral hepatitis at the national level with proven efficacy.

As of today, the following components of project implementation can be singled out: 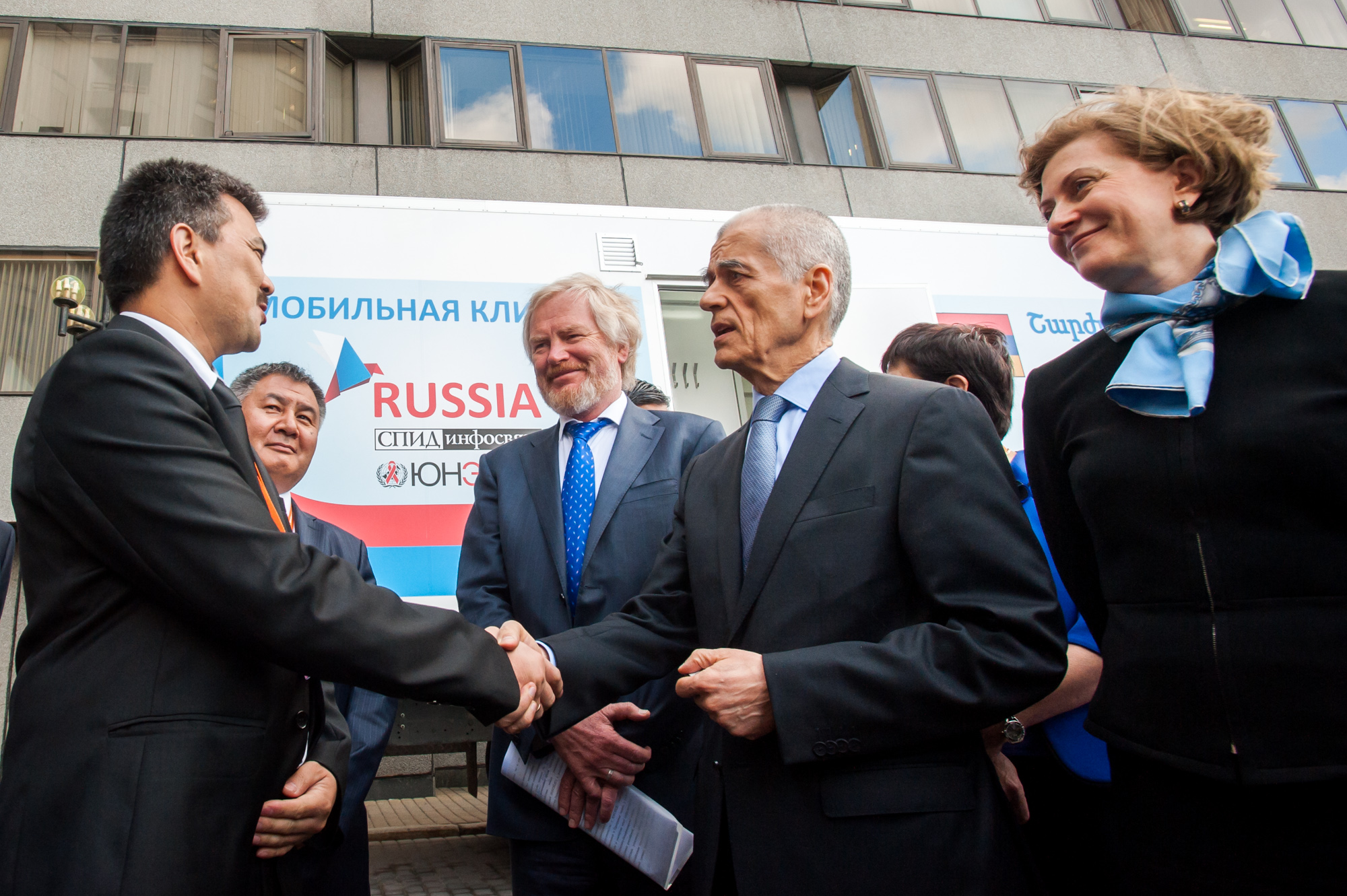 To implement the program components in reality a set of activities has been designed:

Strategic activities to implement these components are shown in the table below:

AIDS infoshare has developed and has been implementing a program for conducting trainings, workshops and events to create and sustainably implement outreach services, provide clinical and consultative aid. It has also organized a number of informational campaigns via social networks and media, provided trainings to healthcare professionals, immigrants and their family members and other high-risk groups. Apart from the educational and prophylactic aid, the project stipulates for material and technical assistance to the recipient countries.

Tight cooperation and process coordination with national authorities (healthcare authorities in the first place) are the key to the success of the RUSAID project.

These agreements paved a way to building relations and setting up an efficient coordination to project activities in these countries based on national programs and strategies.

The Russian AIDS infoshare selects those strategies that best complement the overall efforts to establish prophylactic and management systems for HIV, STIs and viral hepatitis, and aims to avoid intersections with other initiatives running in these countries. The project is open to new participants.

All the documents can be downloaded from here